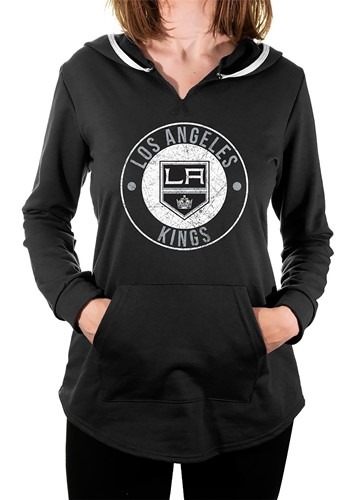 We're aware that the title makes this sound like some sort of fancy Ice-Capades act, but we're hoping at least some of you understood what we were referring to. Ice? The Kings? Whew. Yes, we're referring to the Los Angeles Kings, the hockey team. All right, now that we've cleared that up, let's get on with enjoying an amazing hockey team, shall we? And what better way to do that than to wear some awesome Kings gear. Something like this NHL Los Angeles Kings Women's French Terry Hooded Sweatshirt ought to do the trick. This French terry hoodie has a big LA Kings logo printed on the front, along with a patch pocket. It's perfect for showing off your Kingly pride... yes. Still talking about the hockey team.