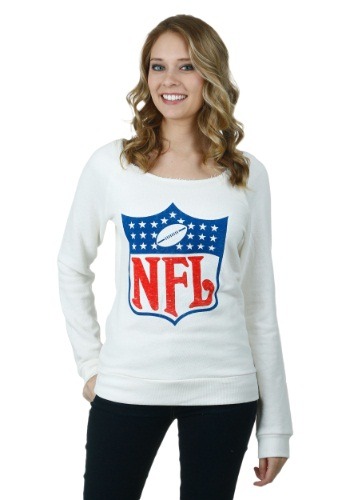 It's hard to pick just one team to root for sometimes. Sure, we all have our favorite, and usually it's based on where we grew up (or, in some cases, where we wish we'd grown up). But what it's really all about isn't so much a single team or even a particular city, but the game itself. That game is football, and in America, it's pretty much synonymous with the NFL. One of the most recognizable brands around, the National Football League has been an institution in the United States for nearly a hundred years... and is one of the reasons we look forward to Sundays (okay, and Monday nights, too). That's what makes this Women's NFL Shield Pullover such an awesome, fashionable choice when sweater weather rolls around!

Officially licensed by the league, this sweater is the perfect gift for any lady who loves football and spends the whole year looking forward to the Super Bowl. With a fun, stylish off-the-shoulder cut and the vintage logo of the NFL on the front, she'll get to show off her dedication to the sport and look great doing it!