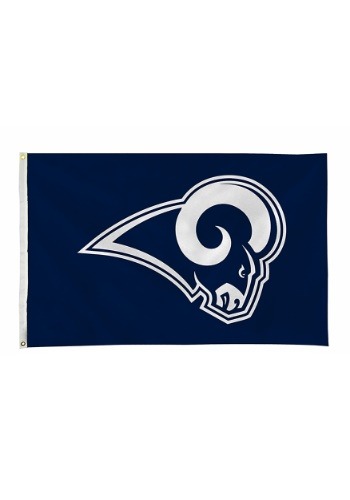 Born and raised in L.A., you longed to get your own hometown team to cheer on. And then, your dream came true. And to say that you’re a Rams fan seems…like an understatement. You are THE Rams fan. You go to every game decked out in jerseys, hats, and assorted gear. You sport your Rams phone case everywhere you go. You named your son Ram…well, Ramsey. But still!

So, we’re honestly not really sure why you’re still contemplating buying this NFL Los Angeles Rams Banner Flag. It seems like a total no-brainer. We mean, after you went the whole “name my kid after my favorite football team” route, a flag seems like an easy choice. Get it, hang it up over Ram’s crib, and teach him young to cheer on L.A.’s very own home team!

This is an officially licensed, NFL-approved team flag. It features easy loops on the sides for hanging, as well as the classic navy base with the Rams logo in the center. It was made for a mega-fan like you!

So revel in the fact that now, you can catch your morning waves before catching the afternoon game. Fly this flag from your truck or hang it in your home window, because it’s a great time to be a Rams fan!