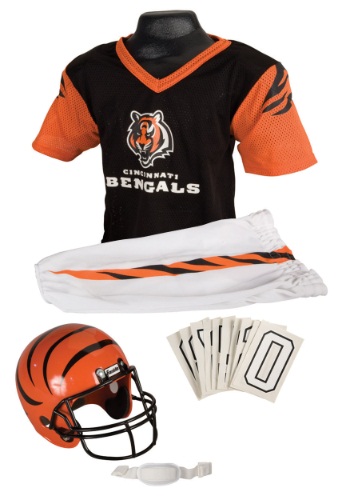 Your little tiger doesn't have to pace back and forth in his cage any longer, watching as his favorite team claws its way to the playoffs without him. We know it's been frustrating, since you and he both know that he'll be one of the greatest NFL players that ever lived... but guess what? He doesn't have to wait for "someday" far in the future anymore. Now it's only a matter of however long it takes for the UPS driver or FedEx guy to get to your house. So order this official NFL Cincinnati Bengals Uniform Set and add your little guy to the roster today!

Officially licensed by the NFL, this set has everything a young Cincinnati Bengals fan needs to hit the field wearing the stripes of his heroes. That includes the jersey, the pants, and, of course, the helmet (which has a chin strap, too). Best of all, the back of the shirt is blank so you can iron on the numbers of your choice (said iron-on numbers included!). In this awesome uniform, your kid will be the very vision of a Bengals star... and the envy of every other Cincinnati fan around, no matter what their age!

Whether he's playing some good, old-fashioned street football, dressing up for Halloween, or just throwing the pigskin around in the backyard, this NFL Cincinnati Bengals Uniform Set is the ideal gift for your Bengals fan. Just don't forget to have a look at our football accessories (like eye black) so he's fully prepared on game day!