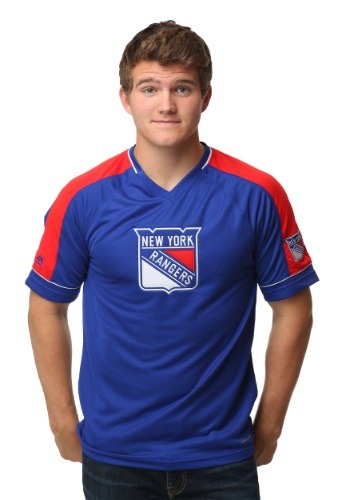 Information
Clearance
Items Out Of Stock
Includes & Highlights
Item #MJMLGP10992NVUL
Items Included
Product Highlights
Size Chart
Product Description
Are you hoping to get drafted by the New York Rangers? Sure, you've been a fan for years, and know everything about NY hockey, but still, we have to think it's a long shot that you're going to get an opportunity to hit the ice with your favorite franchise. If there's one thing we can do to tip the scales in your favor to give you a chance though, we think we've found it: This Majestic Expansion Draft men's t-shirt!

This signature t-shirt is inspired by NHL on-ice apparel, and has a jersey like knit and feel. And, of course, it has the signature Rangers franchise logo appliqued to the chest and sleeve, so that you're going to look and feel like a real-deal player. From Majestic Athletic and NHL officially licensed, this fashionable t-shirt is going to have you ready to watch a whole bunch of high octane hockey. And maybe get drafted and play some too... fingers crossed!