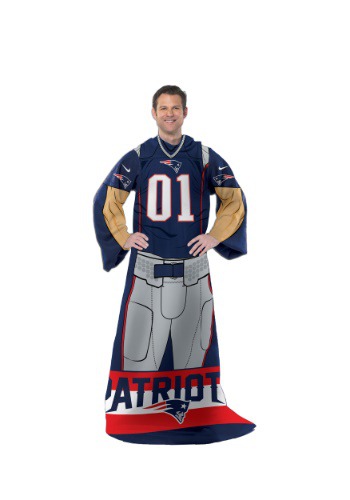 Athletes also need to unwind when they're not scoring touchdowns on the field. This New England Patriots uniform comfy throw allows football players to stay true to their talents even though they are relaxing on the couch. Fans of football will also enjoy the comfort offered by this soft sleeved blanket. They will love watching their favorite NFL team dominate on the team while they are balled on the sofa, shrouded in this fleece throw.

The officially licensed throw features holes for your head and arms making this a wearable blanket. Fans of the Patriots will love being covered in a number 1 jersey, the team logo, and football pants. It's great for all ages and it's the perfect fleece to bring to the stadium on chilly nights. Pick one up for the whole family!