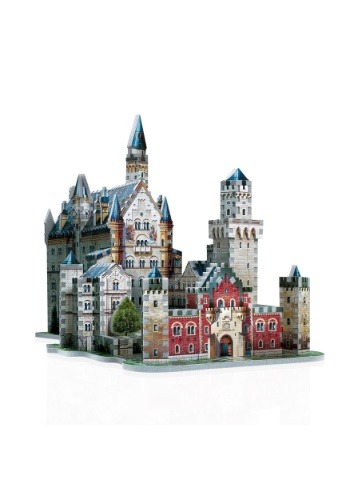 Neuschwanstein Castle has been a landmark since it was built in the 1800's, though it looks like it was from the 1600's. The king that built it, Ludwig the Second was quite an eccentric man who romanticized the extravagant fortresses and castles of the past. So he took his favorite parts from those designs and made himself a vacation home that would go on to inspire all of our fairytale castle dreams, including the most iconic Disney castle! It makes sense that this castle made its way into our theatrical imaginations. It was designed by an opera set designer, after all.

This puzzle will be the hit of your collection at twenty-two inches long and fifteen inches tall. The 890 pieces are sturdy enough that the castle can be put together and taken apart many times over.

While Ludwig the Second might have only spent six months altogether in the lovely halls of this iconic building, the puzzle version is sure to get plenty of use. It's the perfect activity to purchase for nursing home activity rooms, German classrooms, or even for an architectural student. Just put on some Wagner (Ludwig's official composer) and ready the big table. Everyone is going to want to help put together this Bavarian masterpiece!