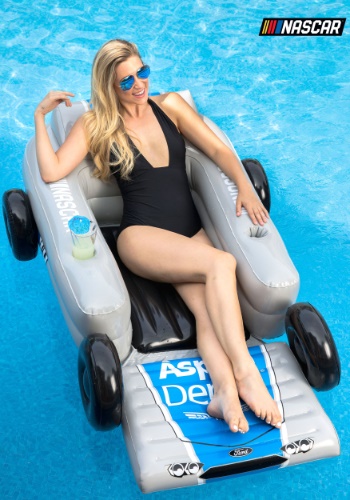 Danica Patrick isn’t known for lounging around. She’s known for perfectly executing every turn, every pass, and running in the pack as one of NASCAR’s best. Lucky for you, you’re not Danica Patrick (unless you are, and if that’s the case we’d love to just say we’re BIG fans). But assuming you’re not her that means you have time to lounge around the pool all day drinking delicious drinks, soaking in the sun and, of course, watching the race while she’s out there racing. Ah, it’s good to be a fan! Modeled after Danica’s famous blue Chevrolet SS, this officially licensed NASCAR pool float lounger matches the car she used during her fourth full season of the Monster Energy NASCAR Cup Series. Float casually around the corners of your pool in pure relaxation. We don’t recommend doing 500 laps like the pros, but this car is so comfy you just might feel like giving it a try.

NASCAR® is a registered trademark of NASCAR, Inc.