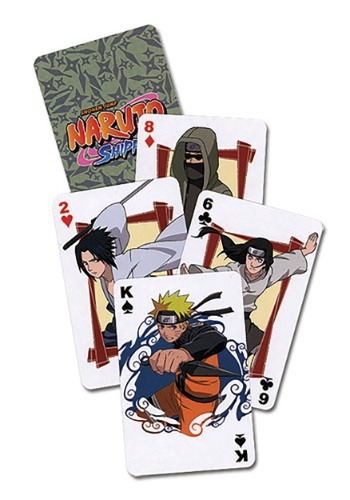 Even Ninja Have Days Off

It’s true. Jonin from the Hidden Leaf Village don’t spend every day on deadly A-Rank missions. They like to kick back, relax, and enjoy a little time off. We all know that Naruto spends his time off at the ramen shop, slurping down insane amounts of Shoyu, but we have it on good authority, that plenty of the other ninja like to play card games.

Kakashi is an avid fan of Crazy Eights. The late Asuma was more of a poker kind of guy. We’ve heard that Neji Hyuga mostly plays solitaire. And Rock Lee? He’s often tricked into playing 52 card pick-up. Of course, we all know that the best way to play any card game is with these Naruto Shippuden playing cards.

These officially licensed playing cards have a design based on the iconic Masashi Kishimoto inspired anime series. Each card has a different character from the series depicted on the card, including Naruto Uzumaki, Sasuke Uchiha, Neji Hyuga, and plenty more. The back has a Naruto Shippuden theme. It has the standard 52 card set-up with four suits, so it’s suitable for all games that require a standard deck of cards.

Just shuffle them up and you can turn poker night into a deadly ninja battle! Your straight flush will be an elite team of ninja.