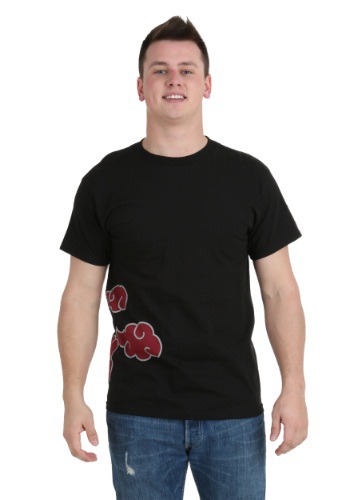 Includes & Highlights
Item #RPNSAS1023
Items Included
Product Highlights
Size Chart
SMLXL2X
Inches
Centimeters
Product Description
What do you think Itachi Uchiha wrote in his Konoha yearbook when he graduated? Do you think that he wrote, “What a long and strange journey it's been,” or something like, “See you suckers later, because I'm joining the Akatsuki cause I got the Magekyou Sharingan!” Nah, he probably just signed his name and called it good. Itachi never was one much for words.

You probably haven't mastered the Sharingan just yet, but don't let that stop you from supporting the Akatsuki like Itachi. This Naruto Shippuden Clouds T-Shirt has the ninja organization's symbol on the side, along with a cross out Konoha symbol in the back. It might not help you master any secret ninjutsu arts and it might make you sort of unpopular with any of the ninja from the Hidden Leaf Village, but it's still a pretty hard shirt to pass up for any fan of the Naruto anime series.