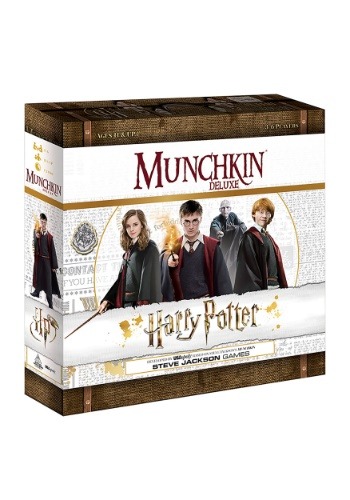 Now that we think about it, the Harry Potter series is like one giant game of MUNCHKIN. Harry and his loyal squad of witches and wizards are on a harrowing quest for magical items while thwarting Lord Voldemort's attempts at sabotage. Since the premise of MUNCHKIN and Harry Potter are similar, it makes sense why game creators decided to fuse the two.

Are you up for the challenge of snatching up treasure from fellow players?  Will you kick down as many dungeon doors as needed in order to be the sole victor, even if you don't know what's lurking behind them? Would you duel with Lord Voldemort in order to be triumphant? Prove yourself a worthy wizard in the Harry Potter version of MUNCHKIN and win the satisfaction of knowing you have what it takes to be a successful and courageous magical being!

It's time to level up! Based on Steve Jackson's game, MUNCHKIN, this Harry Potter style deluxe card game is perfect for those wanting to be immersed in the wizarding world of Harry Potter. Play as a member of your favorite Hogwarts House and hope that you win!

Obsessed with MUNCHKIN? Don't forget to check out all the different MUNCHKIN varieties there are.

$34.99
Item # USPMU010-400 |       Write A Review
Items Included
Product Highlights
Product Description
Questions & Answers
There are no questions for this item yet. Be the first to ask a question!
Ask a Question
Reviews        Write A Review2 Total Reviews
Flott spill!
By Laila / December 22, 2018
Fint spill. Rask levering.
Was this review helpful to you?YesNo