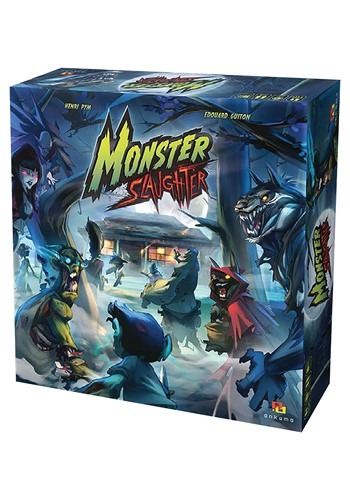 The scientific community has been shaken to its core by new discoveries regarding the rampant attacks on humans in the last several decades. New inquiries have provided evidence that the terrible creatures that we thought were attacking us are, in fact, families of strange creatures that are dependant on humanity to sustain their lives.

A team of students has been invited to a location known for its frequency of monstrous creatures to investigate this new information. The science world waits with eagerness to hear the fruits of their in-depth research.

But, now it's time for the fun part. In Monster Slaughter, you and up to four of your friends get to become a family of monsters that just can't wait to get their hands (or claws) on these invading students! At the beginning of the game, each player gets a copy of Guest Tokens and chooses which order they plan to eliminate them, also choosing their prime target. Players will explore the cabin and surrounding, hunting for the humans' hiding spots, and then doing what monsters do best with delicious people! Trap them, trick them, and snack your way to victory points before they sneak and hide to wait the safety of dawn's light. But, you aren't just eating folks. You want them taken down in the right order! Turn on your monster kin and save the humans to make sure they're taken care of in the right order! Once everyone has been dispatched or the morning comes, the game is over. Add up your points and see who is the top monster clan!

The Other Side of the Horror Story

Monster Slaughter offers a delightful twist on the classic slaughter tale from the '80s. Once you come up with some great tactics for the base game, play with different scenarios and win conditions to mix things up for a new game altogether!