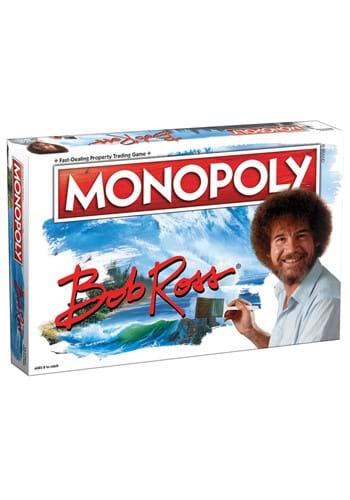 To Chill or Not to Chill

Some Monopoly games aren't chill. People can get too competitive. We've seen it happen many a time. People try to steal money from the bank. People try to rig their dice rolls. People try to squeeze their best friend out of every hard-earned dollar that they have, just so they can feed their ever-growing iron grip over the real estate market. And we've definitely seen a friendship or two get tested by the classic game. That doesn't happen with Monopoly: Bob Ross Edition. The Bob Ross version of the game encourages you to relax with your friends for a nice, non-competitive game!

Bob Ross is chill. His version of Monopoly is chill. One look at the board and you'll notice that it's full of happy trees and fluffy clouds. Bob's smiling face in the center helps add a sense of calm to the game. Instead of indulging in your competitive streak, you may just find yourself gently tumbling the dice as you gaze at the beautiful Bob Ross artwork. It comes with Bob Ross-themed game pieces, including an easel, a painter's palette, and his little rascal animal friends. It's the only version of Monopoly that we want to play these days!