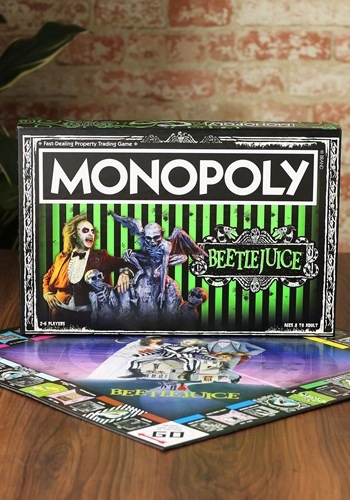 When standing on one of the legendary roads that border the hereafter, it's important to remember the magical laws. If you recite the same of things three times, you'll no doubt find something strange will happen! Call out Home a few times and everything might spin around and bring you to safety. But, if you say a certain Ghost-With-the-Most's name, you'll find yourself right in front of the big guy, himself. So, say it with us and conjure up some fun!

With the three magic words, you'll be able to bring your friends and family together in the Netherworld to play the classic Monopoly with a ghostly theme! It's time for the Monopoly: Beetlejuice Edition! The game is just the way you remember it, though all the sites you'll see are replaced by ghostly characters and creepy events! Try out some ghostly powers to win a chance at victory.

You won't need to consult the Handbook for the Recently Deceased to learn how to get the upper hand in this Beetlejuice-themed Monopoly game. (And fortunately, there aren't too many sandworms causing a problem, either.) Choose your custom token and rush your way around the board to collect your favorite characters.