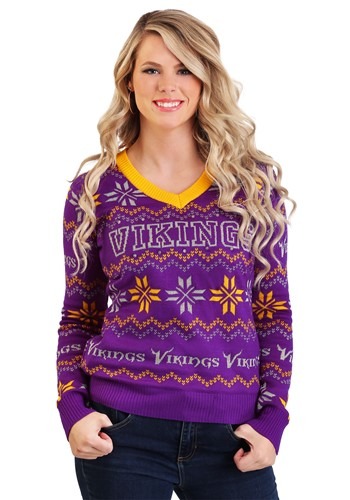 Janet down the street thinks she's the biggest Viking fan. For every Viking game, she throws a big party with homemade salsa and dips galore and invites all her friends over to watch the game. Janet's house is Viking-strewn with knickknacks and memorabilia and you should see her hoot and holler whenever they score a touchdown—it's a sight to behold!

Janet may be a die-hard Viking fan but... so are you, and this is the year you're really going to show it. Give Janet a run for her money by wearing the women's Minnesota Vikings light-up/Bluetooth sweater, which is capable of lighting up and playing your favorite jams. It's a great way to showcase your love for the Vikings and the holiday season. Move over Janet, now you're a sight to behold!

The officially licensed NFL sweater features a knitted purple and gold theme and an interior battery pack (3x AAA batteries are required), to light up and play music. The lights on the Bluetooth-capable sweater synchronize with whatever music you're playing. It's a great way to get pumped up for the big game!

'Tis the season for giving to our fellow neighbor so pick one up for Janet too.