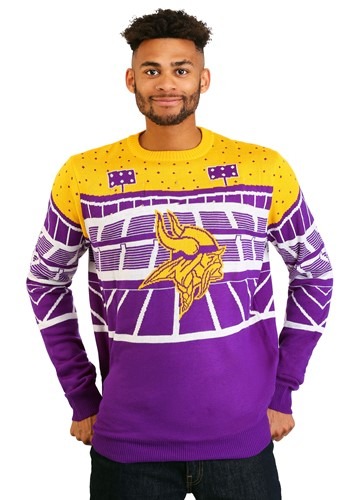 Skol, skol, and skol some more!

You know the Minnesota Vikings Fight Song. "Skol Vikings." Actually, come to think of it, do you have it as an MP3? Better yet, is it downloaded to your phone? Boy, oh boy, do we have just the thing for you.

When you're singing and dancing to celebrate a big time Vikings touchdown, now you can have the sweater style to match when you don this Minnesota Vikings Ugly Christmas Sweater. And this ain't no normal ugly sweater, as it lights up with integrated LEDs. Matter of fact, it connects to your smart device via Bluetooth and plays your music over a speaker. And it even flashes the lights to match the beat of the song. We have to admit we're quite impressed because this is quite a sweater!

This sweater is NFL officially licensed and made with 100% acrylic fibers. It features a knit Vikings logo and stadium design, in team colors purple and gold. It features a built-in speaker and lights powered by an attached battery pack, which just needs 3 AAA batteries to operate.

Get ready for the party

We hear the Vikings are scoring quite a few touchdowns up there in the Bold North, so you're going to want to make sure you have this Minnesota Vikings Light-Up Bluetooth Sweater ready to go for the next game. And, you know, for the annual ugly sweater party, too!