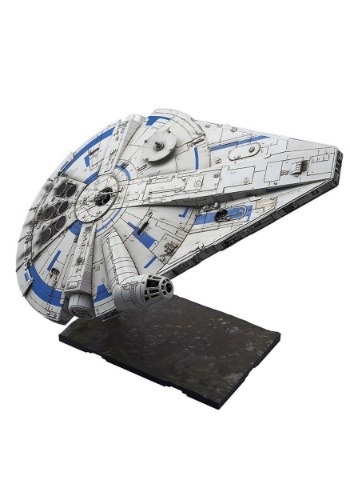 When Lando Calrissian owned the Millennium Falcon, it still looked like a YT-1300 Corellian light freighter stored on one of the manufacturer's docking stations. Considered brand new during the initial missions, Lando kept the Millennium Falcon basically as he purchased it, flashy and unchanged.

But it took one losing hand of cards for him to turn over the starship to the winner with the best hand of cards, Hans Solo. Under Hans Solo piloting, Hans began to do things with it that Lando would have never dared, like the Kessel Run. He then started to smartly modify this starship and soup it up.

This Millennium Falcon shows how different it looked from the version first seen in the original Star Wars series. Han Solo's modifications altered the starships look, as well as the beatings it took fighting or avoiding the Empire's fleet of ships. This snap-together design takes into consideration the actual materials used in the Solo: A Star Wars Story.

The Start of a Humble Space Story

After winning the Millennium Falcon from Lando, Han Solo evolves as a leading character in the Star Wars series. And his legendary exploits take flight.