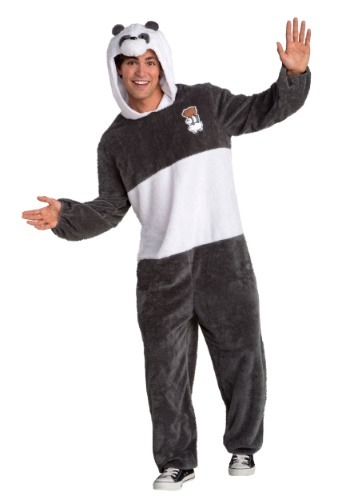 Panda Bear isn't exactly your normal bear. Sure, he might look like a normal panda, but he's so much more than just an average ursine fellow. First of all, bamboo is NOT his favorite food. It used to be, back when he was in captivity. These days, he prefers dumplings. Second of all, he's looking for love. He wants to meet someone special, you know, like a soulmate. You can find him on all the major dating websites. He also enjoys anime, painting, and he also is fluent in Korean. Definitely not average! Lastly, he has a couple of brothers, who are also talking bears!

Yes, he's anything but average. In fact, he's probably a little more like you than any normal bear around. Of course, you and Panda aren't completely alike. After all, he has that nice white and black fur coat (which we imagine is ultra-soft). The only thing you really to be just like him is a soft fur exterior like that. If only there were some way for you to obtain that...

Wait a second! With this We Bare Bears Panda Bear costume, you can become the loveable character from the Cartoon Network series! The soft and cozy jumpsuit has a white and black exterior that mimics the look of Panda from the show. It also has an attached hood, which features the plump little nose and round little ears on it. Finally, a small "Bear-Stack" emblem is on the front to let the world know that this is an officially licensed outfit.

Once you get yourself snuggled into this comfy costume, you'll be ready to live the life of the We Bare Bears character. That means it's time to bust out your anime collection, gather up Grizzly and Ice Bear, and then make a big plate of dumplings! Or you could make your way to the costume party in true Bare Bear style.