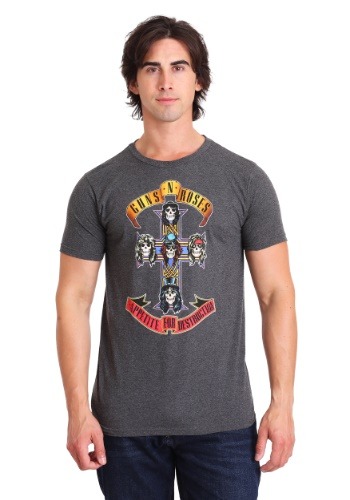 You're in the Jungle, Baby.

The album's cover art captured the imagination of Hard Rock, Heavy Metal fans when they were searching for new artists with a bent for head-banging originals, which were different compared to other famous acts.

In the artwork, the knotwork, Celtic cross serves as the centerpiece and is a tip of the hat to Thin Lizzy, a band influence. Skull faces for each of the five band members fill five places on the cross, with Axel Rose at center and Slash at the bottom. The shirt is a cotton, polyester blend.

Wear this cover art, which made its way onto thousands of t-shirts across the country, worn by G N' R fans who always wanted to go somewhere with a piece of the band traveling with them.