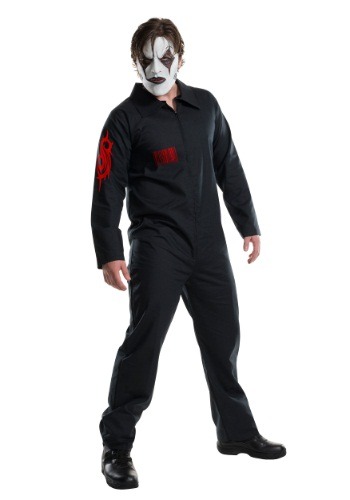 So, you think you have what it takes to go as hard as Slipknot? This costume looks deserving of its own horror movie, are you sure you can handle it? When you wear this costume out on the town, people are going to expect you to rock out for them. What song would you sing?

We've prepared the perfect set for you to impress your friends. First, you'll start by singing "Duality." After Duality, we were thinking "Psychosocial", something nice and hard to get the people extra rowdy with your heavy metal rocking. Now, all you'll need is a song to close out your set. We were thinking that "Before I Forget." Would be a great way to finish out. If people start asking for an encore, finish out with "Snuff". These four sings will leave no doubt that you can rock every bit as hard as Slipknot.

This costume might look like it belongs in a horror movie, but it's actually an officially licensed Slipknot costume! That's right officially licensed, so, you can rest easy knowing that you look like the real heavy metal deal. You'll be wearing the jumpsuit pictured above; it's black and has 9 different decals to make sure that you look like a true member of the band. It has a star on the back, a barcode on the front, and a tribal style "S" on the front, meaning all you'll need to grab now is a mask to match!

When you go out as a heavy metal rocker, people will expect you to act a certain way. You need to be bold and rock for them! Don't let the crowds down when you go out in your slipknot costume, everyone will be counting on you to get the party rocking.