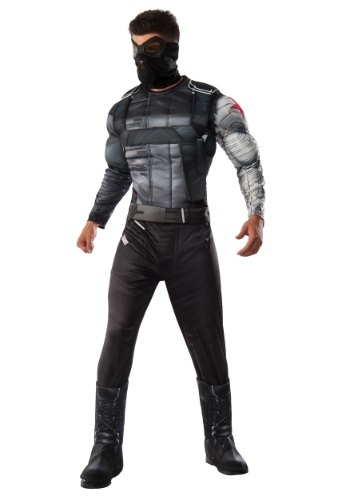 This is an officially licensed Deluxe Winter Bucky Barnes has had a pretty interesting life. First, he was the gung-ho WWII Army hero who got eclipsed by his scrawny best friend, Steve Rogers. He was a pretty good sport about that, until he got killed… but he got better! Then he got amnesia and was programmed to be a Soviet assassin, complete with a cool new bionic arm. Then he remembers everything thanks to Captain America and becomes good. Eventually, he even becomes Captain America after Steve Rogers is killed. It’s a huge, 180-degree turn redemption story. It’s a rollercoaster of a saga. It’s a drama-filled narrative filled with cheers and tears. It’s… well, you get the idea.

It’s hard to pick out the most interesting part of Bucky’s story, but his stint as the Winter Soldier is definitely high up there. He’s so intense as a strong, silent assassin, and he really packs a mean punch thanks to that bionic arm. (Plus, he rocks that super-model-level haircut.) Honestly, he kind of upstages everyone else in the movie, especially that insufferable Tony Stark. It’s really easy to side with Cap and Bucky over Iron Man, and it’s mostly because of Bucky. Team Captain America!

You know, now that we think of it, when Bucky becomes the new Captain America, there’s going to be a Winter Soldier-sized hole in the Marvel universe. This is your chance! You can become the new Winter Soldier… but only if you can prove you have what it takes. Start with this Men’s Deluxe Civil War Winter Soldier Costume. The officially licensed costume jumpsuit is 100% polyester and comes with foam padding to imitate Bucky’s impressive physique. There’s 3D armor attached at the shoulders and side seams, along with 3D boot tops to fit over your shoes. There’s also a mask that covers your eyes, mouth and neck. With this costume, you’ll be ready to take your place with the rest of Earth’s mightiest heroes!