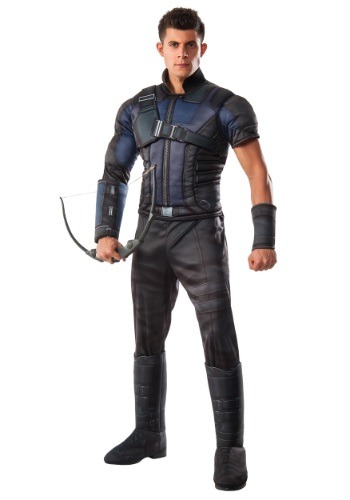 It’s probably not a surprise that a hero who gets his nickname from a bird with incredible vision would also have an eye for fashion. For a guy who doesn’t have any super powers per se, he sure looks the part with those killer leather duds and accessories. It almost makes you forget that he’s a mortal dude, just like the rest of us. That’s why you’ve got to be sure you’ll hit the mark in the wardrobe department before you join the Avengers as the team's resident archer. So forget hunting high and low at thrift stores and archery supply companies for all the right pieces… because this Deluxe Hawkeye Civil War Costume has it all!

Officially licensed by Marvel, this costume is modeled after the look of Hawkeye in Captain America: Civil War, and takes your cosplay to a whole new realm of movie-level authenticity. It's crafted from a mix of polyester fabrics and polyurethane foam for that textured, layered look that seems like it's only available at the secret department store where Marvel superheroes buy their clothes (which we're assuming totally exists). The set includes a jumpsuit with padded muscle, boot covers, and a wicked forearm gauntlet, plus an arm guard (a crucial accessory for a master archer).

Whether you're on a solo mission or joining the rest of your fellow SHIELD agents for an epic battle, you'll look every inch an arrow-shooting hero in this awesome suit. And if your pals want to join in, have them check out the rest of our Avengers costume selection!