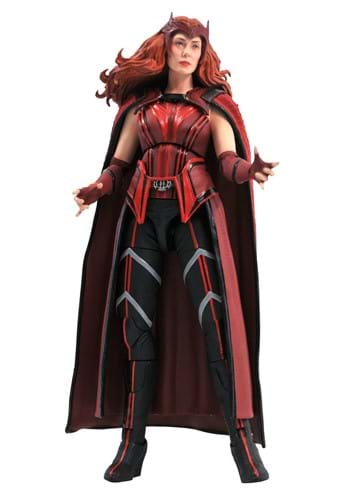 No matter where she is in the multiverse, she's always one of the most powerful beings in existence. The Scarlet Witch has reshaped entire universes in X-Men comic books, and now, she's begun to discover her true power within the Marvel Cinematic Universe. Now, she's ready to join your collection. This Marvel Select WandaVision Scarlet Witch Action Figure brings the nexus being straight from her universe, into your collection.

This Marvel Select action figure brings you one of Marvel's most powerful characters. The figure stands 7 inches tall and is modeled after Wanda Maximoff's appearance in WandaVision. The figure has tons of great details, including realistic texturing, a beautiful paint job, and interchangeable hands. She also comes with power effects that recreate the look of her enigmatic abilities. She also has plenty of points of articulation, which allows you to place her in the perfect pose.