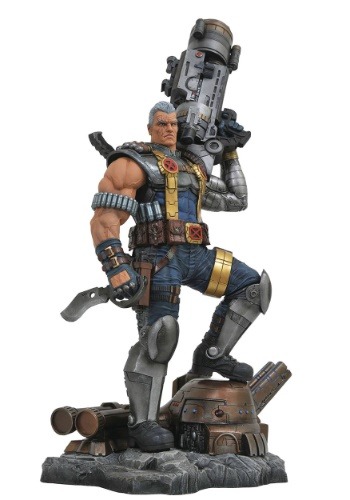 What Doesn't Kill You

Cable has been through it all. Infected with a techno-organic virus? Check. Forced to live in a post-Apocalypse world where everything is trying to kill him? Yeah, he's done that. Fought against Wolverine in a brawl. Did that, lived through it. Heck, the guy even survived a partnership with Deadpool. Most people get tangled up with Deadpool end up dead or they lose their mind. He survived all of that and came out stronger with each peril that he faced.

This Marvel Premier Cable Statue shows you the legendary X-Force leader in his prime, after surviving countless scrapes with death. The statue is an impressive 16 inches tall, it's made out of molded resin, and it has plenty of details sculpted right from the comic books. He's standing on a pile of rubble and he's packing one of his many heavy-hitting weapons from the future. Wearing his classic uniform, which even has sculpted ripples to create the look of fabric on his pants, he strikes a combat-ready pose. Only 3000 of these statues were ever made and it even combines with the Domino and Deadpool statues for a stunning scene that captures the style of the X-Force comics from the 90s.