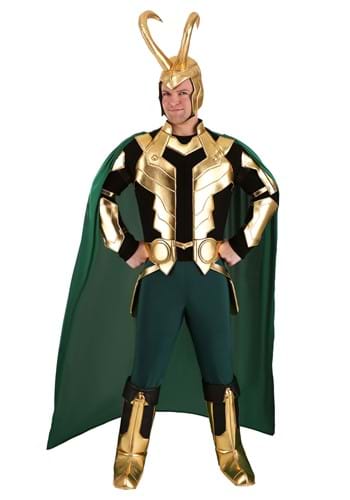 The Gift of Gags

Did you ever hear the true tale of the God of Trickery from Asgard? He's a tough character to nail down. Is he the son of Odin? Is he, in truth, the child of the Frost Giants? You have to admit that he doesn't really look like his golden-haired brother. (Then again, he hardly looks like a blue-skinned, 12-foot-tall monster, either!) Plus, the Frost Giants are hardly known for their sense of humor. Given how great Loki is at dropping a joke, he's got to be an Asgardian deity! If you think that you've got what it takes to tell a joke with divine precision while stealing the stage from the likes of Thor, we've got something that is going to help you ascend to Asgard!

No need to conjure up the Bifrost because we're here to be your Heimdallr with this officially licensed Premium Loki costume from the Marvel Cinematic Universe. This exclusive costume begins with a green & black jumpsuit with attached reflective armor. Boot covers and arm bands match the armor to complete your look while you flourish your ankle-length cape. Just make sure you duck under door frames when you wear the horn helmet headpiece. (Really, that's the true power of the God of Trickery, we think!)

A wealth of magical mayhem awaits you when you give a twirl in this exclusive Loki costume. From the grand horns to the epic cape, the only things that'll be more magnificent are the pranks that you can pull!