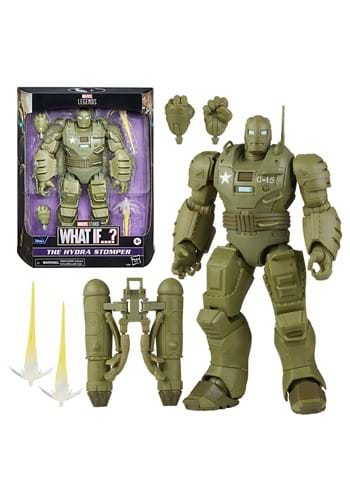 Take away the Super Soldier Serum away from Steve and what do you have? He's just a scrawny guy from Brooklyn who never gives up. He'd probably still be trying to fight an entire war all by himself! Well, the good news is that Howard Stark has teamed up with Steve to create this deadly suit! The HYDRA Stomper combines top-of-the-line tech with Steve's determination to create a sidekick that's ready to put the Hulk to shame! He's also the best sidekick that Captain Carter could ask for in her quest to crush the forces of evil... and this action figure brings you a version of the suit that you can add to your collection!

This Marvel Legends What If? HYDRA Stomper Action Figure is a 6-inch scale figure inspired by the Marvel animated series. It features various points of articulation, along with plenty of realistic details inspired by the show. It comes with alternate hands, along with a couple of accessories, so you can customize the pose. Just pair him up with a Captain Carter action figure and they'll be an unstoppable combination in the fight against HYDRA, or at the very least, they'll become your new favorite figures in your Marvel collection.