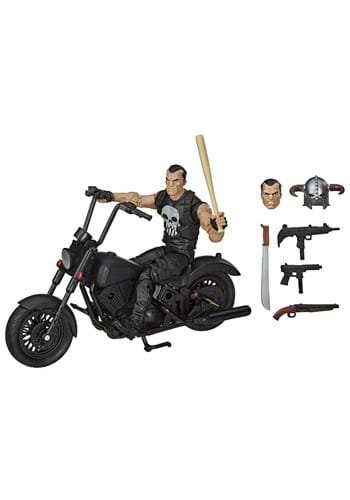 Frank Castle means business. He's not going to pull his punches like other heroes. Spider-Man would never land a finishing blow on a bad guy... but there's a reason they call Frank Castle, The Punisher. He's the Marvel anti-hero who takes the fight to the bad guys' doorstep and he shows no mercy. And this Marvel Legends The Punisher Action Figure? Well, it's going to show no mercy on your Marvel collection!

This highly-detailed figure captures Frank Castle's rugged style. He comes with a variety of toy accessories, like a baseball bat, a machete, and various other toy weapons. He also comes with interchangeable heads and a helmet, so you can customize how your Punisher figure looks. He has 18 points of articulation, so you can pose him in plenty of different poses. He even comes with an 8-inch long motorcycle, so he'll be ready to ride to the rescue!