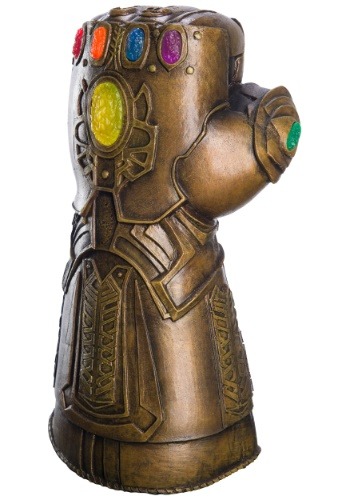 SUCH A GREAT IMAGINATION

The glorious thing about a powerful imagination is that anything someone thinks becomes just a little bit real.  It's how we have such great books to read, games to play, movies to watch.  It all begins with that wondrous question, "What if?"

Now, perhaps something like the Infinity Gauntlet... that little trinket which houses the stones that basically act as the pillars on which all of existence rests... Sure, that might be a little more literal in its ability to make anything its wielder desires, but even that began with someone's really cool idea.

Give the ultimate gift of unlimited imagination with this Kid's Infinity Gauntlet made famous by part one of the Infinity War.  This officially licensed latex glove is molded and treated to look like it were ancient bronze metal.  Six faux gems are set into the gauntlet, each representing the colored Infinity Stones.

It's pretty hard to come up with a single word that defines the power of the Infinity Gauntlet.  Remake reality?  Well, no, that's just one-sixth of its power.  Create anything?  Nope.  Just another part.  It's going to take some real magic to come up with precisely what this Infinity Glove can do.  Fortunately, your kid will have it and that means anything could come to life when their imagination comes into play!