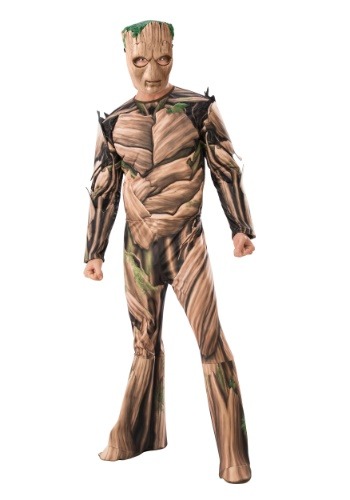 How could Groot ever lose? Just look at his long resume and you’ll see. First of all, the tree-folk has some crazy super powers. He can take out a dozen rogue Ravagers just smacking them around with one of his branches. Also, remember what happened to him in the first Guardians of the Galaxy! He shielded the rest of his pals from a spaceship crash and he was able to regrow out of just a tiny limb surviving the spectacle. Let’s see… he can also use bioluminescent spores to light up the darkness and he also has superhuman strength, so there’s that. We just don’t see how Thanos even stands a chance when Groot is on the opposing side!

Oh, right. He has a powerful glove that can alter the very fabric of reality… that could be a problem! The good news is that when you wear this Infinity War Groot Costume, the tide will surely be turned in the favor of the Avengers.

Help the Avengers win the battle by dressing up in this Groot costume, which is inspired by the one seen in the latest Avengers film. It comes with a padded bodysuit, which has plenty of printed details on the exterior, like branches and moss. It also has a pair of attached boot covers that fit over any pair of shoes you might have. Pair that up with the included mask and you’ll look just like the arboreal character from the movie.

You’re going to feel fit enough to fight against Thanos when you wear this. Don’t go it alone though—that guy totally has the Infinity Gauntlet and you are going to want to mess with him unless you have some hearty allies at your side. Get your friends to dress up like Rocket Raccoon or Thor to be prepared!