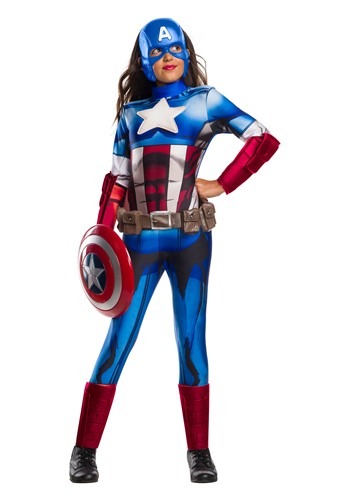 Steve Rogers? He's old news... literally. That guy was suiting up back in the 1940s during World War II. We think it's time for him to hang the shield up and enjoy a much-deserved retirement. That doesn't mean that Captain America's legacy has to end though! As long as there are still brave souls willing to stand up to bullies, the Cap legacy can live on! We think that it's time for your girl to take on the title of Captain America.

If your girl is brave and has the will to fight against the evil bullies in the world, then she might just have what it takes to wear the stars and stripes like Steve. The first thing she's going to need to be the new Cap? This Marvel Captain America Costume for girls.

This Captain America costume takes its inspiration from the classic outfit worn by Steve Rogers in the comic books. It comes with a jumpsuit that has the red, white, and blue colors of his iconic suit. The front has a star, along with printed muscles and shading to give it a fresh comic book style. The mask fits with an elastic band and has Cap's "A" designed into the forehead. It also has wings designed into the sides to finish off the look. If your girl wants to face off against the villains of the world, then this is the uniform to wear while doing it!

Captain America always led the charge when it came to fighting for what's right. If your girl has that same fiery passion for justice, then she'll be able to follow in Steve Rogers' footsteps, no problem! We recommend building her a team of Avengers, so be sure to check out our full selection of Marvel superhero costumes to give your girl the back she's going to need!