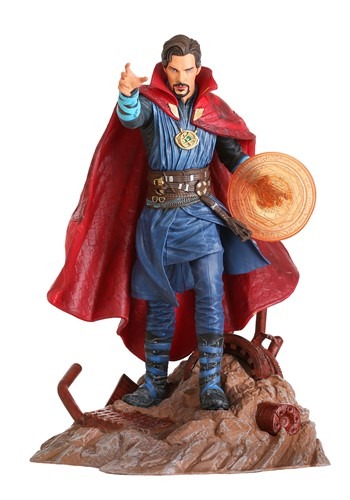 It's time to make your stand. With Thanos coming to claim the Eye of Agamotto (and maybe you're collection along with it), you're going to need a Sorcerer Supreme if you want to protect everything you hold dear. Don't worry though, because Doctor Strange has your back. He might be shrewd and he may be a little bit cold, but he's ready to use his powers to protect the realm from any sort of supervillain nonsense that's afoot.

This Marvel Gallery Doctor Strange Statue is inspired by Benedict Cumberbatch's performance from the Avengers: Infinity War. It's made from molded PVC and stands around 10 inches tall. His base consists of a scene of rubble landscape, including metal girders. The statue himself is posed in a battle stance and he looks ready to use his magic powers against the likes of Ebony Maw. He even has a translucent orange magic circle around his hand.

He Put a Spell on You

If you're looking for a way to protect your collection against Thanos, then this officially licensed figure is the way to go. If you just happen to like Doctor Strange, then this is also a spellbinding collectible to add to your Marvel collection!