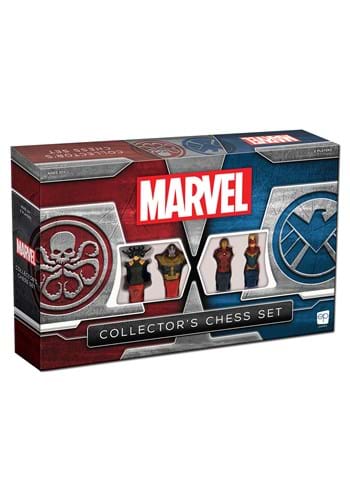 The excitement of teaming up with the likes of Thanos and Hela is too much for their Hydra pawns. As the plan ripples through their ranks, the Agents of Shield gather the leaked intelligence. Believing loose lips sink ships, they relay the knowledge to the Avengers who know it’s only a matter of time before the formidable teams and their supporters assemble on the battlefield. Decide, once and for all, which side is worthier of universal notoriety with this Marvel Collector’s Chess Set!

Upgrade your chess game with this custom chess board featuring the traditional chess roles reimagined as iconic Marvel characters. Watch Hydra and Shield clash to protect their chosen heroes while your favorite Avengers and villains face-off in a battle that is sure to end in checkmate. Officially licensed and high-detailed, this collector’s item will have every Marvel fan excited to learn and play the great game of chess!

The board is set. Countless moves and reactions run through your mind. But there’s only one goal:  victory. Your pawns move forward while your knights defend. The king is safe guarded by his queen. But there can be only one winner, and your wits determine who it will be.