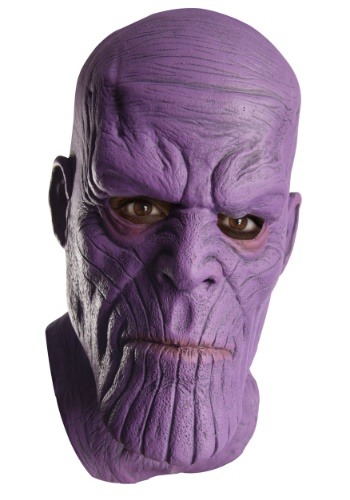 Thanos spends a good portion of his time cooking up some spectacularly evil schemes. He was the one behind Loki’s invasion of New York City using the Chitauri army. Even the mighty Avengers had a tough time dealing with that little escapade! He also masterminded the attack on Xander, which was barely thwarted by the Guardians of the Galaxy. Now, in Avengers: Infinity War, he’s waging war on all living things! We often wonder what other schemes he’s been plotting. Maybe he was the one behind the capture of Howard the Duck!

Well, are you like Thanos? Do you have a head full of evil schemes? Do you want your shot at doing battle against Captain America, Thor, and all of their superhero pals? Now is your chance with this realistic looking mask.

This Marvel Thanos mask is the kind of accessory that can turn any normal fellow into an intergalactic menace! The latex mask is molded to look like the villainous character from the Avengers film and comes with intricate details etched right into the mask. The mask has scars along the jaw, along with a furrowed brow. It also has that purple color that the Mad Titan is known for. Just slip it on and you’ll be ready to wreak some havoc!