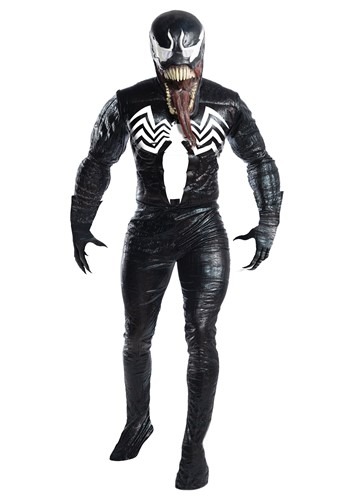 Venom has a pretty strange history. Just take a look at how he started! He began as just a slimy lump of goo that bonded to Spider-Man. The two got along alright for a while, but it turns out that the little Symbiote liked beating up criminals a little TOO much, so Spidey had to break up with the guy. After that, Venom fused with Eddie Brock for a while. Things were going pretty good causing mayhem, but then Brock decided to give the whole anti-hero thing a try! Then, the Venom Symbiote hopped around to different hosts, like Mac Gargan, Flash Thompson, and Lee Price, but he eventually made his way back to Brock.

He's kind of unpredictable—there's really no telling who he might bond with next! Why, it might even be you!

With this Marvel Adult Venom Costume, you become the Symbiote! Okay, okay. So maybe this costume just makes you LOOK like you've bonded with the Symbiote... but it does do a pretty good job of it! The costume starts with a black jumpsuit with a wet-look sheen finish. It fits with a zipper in the back, so you can quickly transform into the Spider-Man villain. The chest, arms, and thighs all have muscle padding in them to give you the buff and tough look of a supervillain. The front of the suit has Venom's white spider symbol on the chest. It also comes with a pair of black gloves that match the wet-look of the suit. Finally, to bring the whole look together, this costume comes with a molded latex mask that perfectly recreates Venom's face.