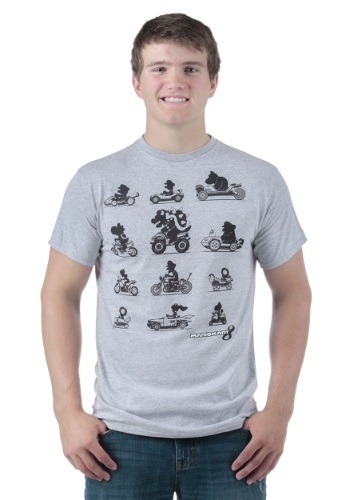 It’s tough for the all-around awesomeness of Super Mario Kart to escape you as you’re racing around the Rainbow Road… Maybe you loved Bowser’s bulk, were there for the ultimate video game crush that is the Princess Peach, or you just got off on chucking massive eggs at other high-speed vehicles (aka, our teenage version of a fun Friday night) like Yoshi. Whatever it was that whipped you into a frenzy over this action-packed yet strangely comforting video game, we’re here to tell you that loving this game so much you wanna wear it on your chest doesn’t blow our minds.

But what might blow your minds are some fast facts about Mario Kart! First fact: You will let us have Toad as our driver, or we will want to fight you. Second fun fact: Mario Kart essentially ruined Donkey Kong as we knew him. After being one of eight main characters in Super Mario Kart, he was dropped from later Mario Kart games, and was replaced/morphed into Diddy Kong and/or Cranky when it came to filling Nintendo’s primate-shaped roles (#RIPDonkeyKong). Third fun fact: This game is the best, most classic game to ever come out of the Mario series, and if you don’t agree with us, again—we will want to fight you.

But you probably already know that, don’tcha, sparky, otherwise you wouldn’t even be here! But since you are, we gotta tell you—you’re making some great choices in choosing this Mario Kart 8 The Racers Men's T-Shirt! Officially licensed, this 50 percent cotton, 50 percent polyester tee will keep you cool and dry while you’re making an animated character do all of your hard work for you. The cool design on the front of the tee says, "Hey, I'm fun, but I'm also fly." Basically, in this Men's Mario Kart 8 The Racers T-Shirt you'll be looking like a winner both on the Rainbow Road and off!