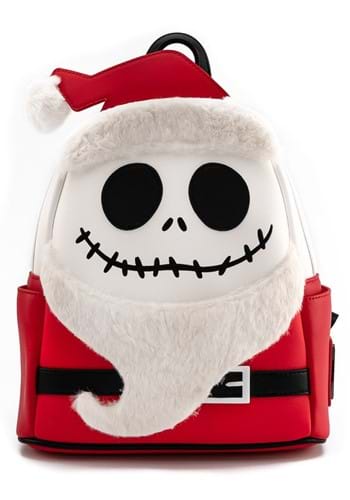 Jack Skellington had been rocking a fitted pinstripe suit for ages long before he found the tree leading to the magical Christmas Town. And now that he's had a taste of the holiday spirit, he can't seem to let it be! He wants more color, more cozy, more cosplay! That's right, we think his holiday takeover could have been prevented if he was only allowed to dress up as Sandy Claws for a week or so. That way, no harm would come to the decked halls of Christmas Town and Jack would still be able to rock his red velvet suit and long white beard.

Loungefly has perfectly captured Jack Skellington in his Santa Claus cosplay with this mini backpack. Perfectly blending cheer and fear, the Christmas red faux leather is detailed with shaggy white material to create Jack's twisting fake beard and the trim of his Santa hat. The bag has two side pockets, adjustable straps, and a handle at the top for hanging and carrying.