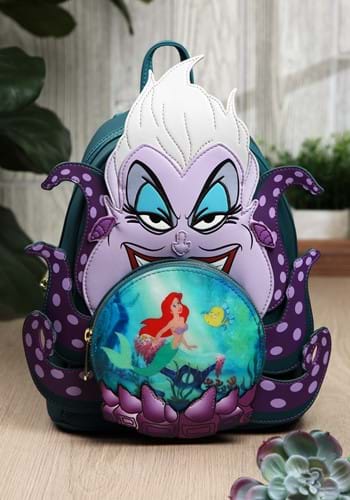 Villains are evil in a lot of different ways. Some bad guys truly believe they are doing the right thing, which makes them a little scary, while others openly confess their less-than-moral goals. However, Ursula is an entirely different type of malicious. She hides her evil intentions behind the disguise of wanting to help “poor, unfortunate souls,” whom she then keeps in her garden when they fail to keep their end of the deal. There’s something about bad guys masquerading as good guys that gives us the shivers. And Ursula deceives not only Ariel but also Prince Eric when she later disguises herself as Vanessa. We think she’s a truly formidable villain, and we’re glad she doesn’t win in the end.

Even though Ursula doesn’t ultimately win, it sure doesn’t stop her from doing everything she can think of to make it difficult for Ariel to succeed. It certainly helps that she’s able to spy on Ariel with help from her eel minions, which is creepy but also kind of awesome. This Loungefly Disney Villains Ursula Crystal Ball Mini Backpack captures one of these moments of peril, but in an absolutely gorgeous way. Ariel and Flounder are in the crystal ball that Ursula is using, and Flotsam and Jetsam even make their appearance as the backpack straps! If you think this sea witch is as cool as we do, you’ll love adding this beautiful backpack to your collection.