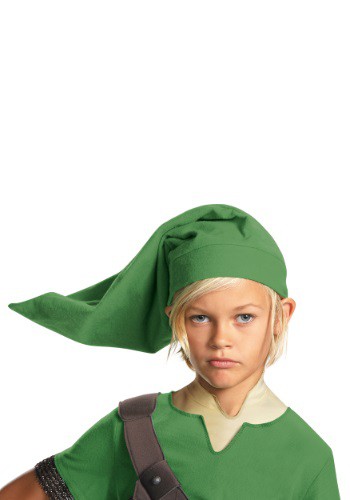 You’ll notice that most of the great professions in the world wear hats. It’s basically a requirement for any awesome job! Police officers wear those peaked hats and fire fighters get to wear those flashy helmets. Cowboys always sport a cowboy hat and construction workers can seldom be seen without one of those yellow hard hats. And, well, the hero of Hyrule? He wears a long green pointy hat!

Yes, Link is almost always running around with his classic green cap during The Legend of Zelda games. It’s a look that tells the Hylian people that he’s there to kick some Ganon butt and now your child can get his signature look with this child Link hat. It’s based on his headgear from the various Nintendo video games, so your young one will look fit to fight a lizalfos when he puts it on his head. Just make sure you train him how to use a sword—it’s dangerous to go alone out there!