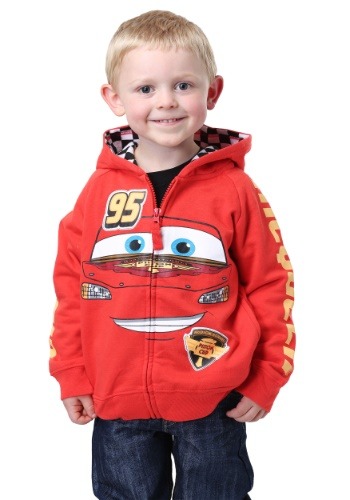 Your kiddo is fast, a finely tuned machine. One minute he'll be vroom-vrooming around the living room and the next he'll be across the house screeching around the corners and bothering his siblings. While for the moment he's stuck with his trike and the occasional bumper car ride you sometimes wonder what he'll be like as a driver. No worries, we doubt anyone could wreck a town as thoroughly as McQueen did in the first Cars movie!
While it'll be a while before he's behind the wheel of his own car, there are plenty of ways your little speedster can stay inspired. For one, make sure he's got a Lightning McQueen sweatshirt to wear over his favorite cars T-shirt! What's the point of wearing your favorite shirt if it's too chilly out to see the character? This cozy sweatshirt zips up to show your kid's favorite character's confident smile, has the Lightning McQueen printed on the arms, and has a hood lined with the classic finish flag design. So zip your little buddy up and even though it's chilly he'll be ready to go, go, go!