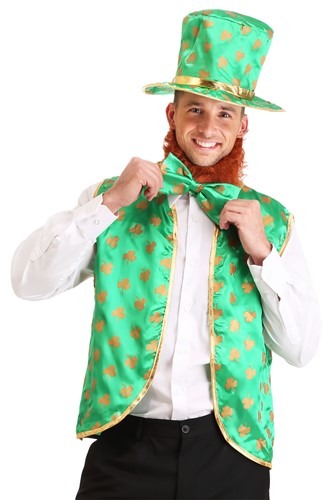 Once upon a time, we were out on a company retreat. You know the whole thing. Grilled food, local music, trust falls, six-legged races, fireball juggling, backflipping through portals to other realms and zipping back before they close. Standard kinda stuff!

But, then we saw a brilliant rainbow shoot through the sky and land right in the middle of the talent contest. (Just when the entire marketing team was finishing an inverted human pyramid!) Out popped a delightful leprechaun and, suddenly, there was a whole new kind of race. We all knew the legends. Capture a leprechaun and it has to give you its treasure. Well, we double-checked first. (Wouldn't want to just chase after a party guest if he didn't want to be pursued.) Then the game was on! It took the whole danged rest of the retreat before somebody dropped a bunch of gold chocolate coins and the leprechaun needed to stop and count them all. Anyway, that's how we learned about the leprechaun's treasure!

Turns out the most magical thing about a leprechaun is how well they pull off the green look! It seems that the true secret comes in the golden shamrocks that line their vivid vests and the matching top hat that really pulls the look together. Their brilliant red beards and green bow ties certainly help to give a little extra oomph to the legendary look. With all of the fun that we found with our leprechaun friend, we had to offer you the chance to let your friends and family capture one of their own... and you're it with this Leprechaun Costume kit!

Make sure that you are rocking every moment of your own kind of retreat with the brilliant style of the leprechaun thanks to this costume kit. Just remember not to let them tug on your beard... unless of course they're looking for luck!