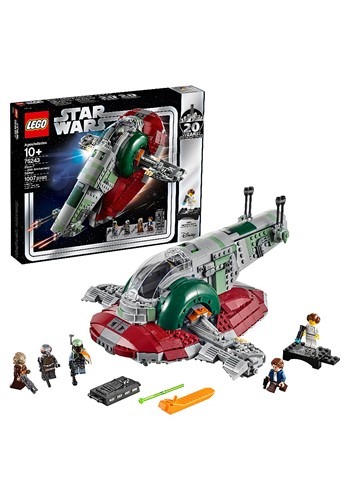 A Bounty Hunter In a Galaxy Far Away

The man. The myth. The legend... and his ship! Boba Fett really stole the scene back when Empire Strikes Back first released in 1980. No one knew much about the character and he only got a few minutes of screen time. All we knew was that he was sporting a pretty stellar set of space armor and his ship was pretty darn cool! All we ever wanted was to have a ship of our own. Of course, the folks from LEGO were happy to oblige. They created this 20th Anniversary Edition of the LEGO Star Wars Slave 1 Set, so collectors can relive the fantasy of having their own Slave 1, brick by brick.

Are you ready to feel like the ultimate lego bounty hunter in the Lego Star Wars Universe? With this incredible Lego Star Wars Slave 1 20th Anniversary Edition, you can add the iconic ship to your amazing Lego Star Wars Collection. You'll get four mini figurines including the 20th Anniversary Princess Leia. It comes with a whopping 1,007 pieces and when fully assembled, it recreates Boba Fett's ship in all of its glory. It's a must-have set for any Star Wars fan.