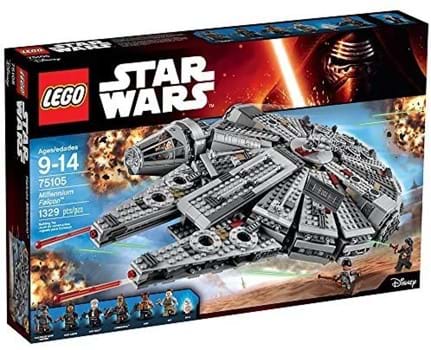 The galaxy far far away just wouldn't be the same without the Millenium Falcon traversing the space lanes and thwarting the Empire. This LEGO Star Wars Millenium Falcon iteration is coming from the newest trilogy. Star Wars: The Force Awakens has the Millenium Falcon seeing better days, being first located in a junk depot in a remote corner of Jakku. The satellite dish has a new rectangular upgrade from the original trilogy, and a new crew! This 1329 piece set includes Han Solo and Chewbacca, along with Finn, Rey, BB-8, and 2 pirates out for Han Solo's debts!