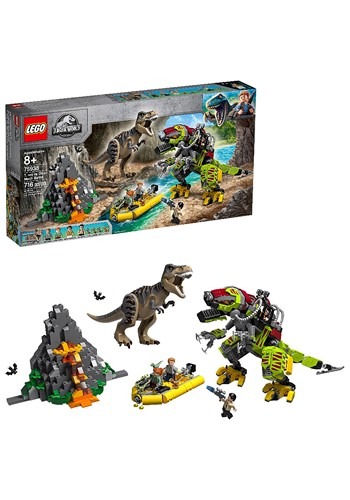 Here's the thing, Jurassic Park was not a good idea from the start. Has anyone that is reading this seen how your average tourist behaves at any attraction, even without giant man-chompin' lizards? Yeah, not well. If there's a line of caution tape, people will assume that's the attraction for the V.I.P. crowd and slip right under that hazard, imminent danger notice. Any sign telling families to stay at least ten-feet-away from the wild animals will be swiftly ignored. And these John Parker Hammond thought he could open a park with real-life dinosaurs with all their teeth intact? The gall!

The concept of Jurrasic Park isn't the most logical tourist attraction we can think of, but it sure makes an awesome Lego set! It features a buildable T-Rex and Dino-Mech, and there's a buildable volcanic rock that has an opening function to reveal a hidden treasure chest. With plenty of character mini-figures, and even baby velociraptors and a boat vehicle, we're sure the action's going to be non-stop when this set gets built!