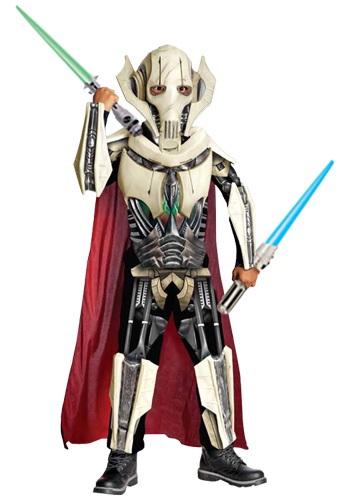 We admit, being Count Dooku's right-hand man isn't always easy. He's got a lot of responsibilities, lots of enemies, and don't even get us started about that nagging cough of his. But there's a lot of perks that go with the job, too. First of all, as General Grievous, you get to be an awesome cyborg. Second, you get to control like, tons of battle droids. Who wouldn't want to do that? Third, you're the only non-Jedi around with the guts (pardon the pun, we think)... and the skills... to wield not just one, but multiple lightsabers! So if you think that any of that might sound cool to your kid, have we got a job for him! The separatist army is his to command when he suits up in this Kids Grievous Costume!

Modeled after the guy who made "being more machine than man" cool decades before Darth Vader ever came onto the scene, this awesome suit will instantly transform your kid into one of the fiercest commanders of the Clone Wars! Best of all, there's just two pieces to worry about. The jumpsuit comes with the general's cape and signature battle armor attached, and the mask is easy to wear (it stays on with a simple elastic band), but just as sinister as General Grievous's menacing mug!

So when Count Dooku calls on your kid to lead an attack on the Galactic Republic, make sure he's ready to answer with the Kids Grievous Costume! Just don't forget to pair it with a couple of Star Wars lightsabers so he can show the Jedi how it's done!