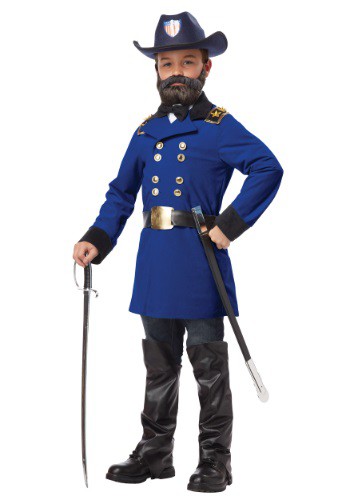 Is your little one quite the history buff? Well, we’ve got the perfect costume for him. This Halloween he can dress up as the great General Ulysses S. Grant with this kids costume! He’ll be a decorated war hero that not only fought the good fight for our beloved country; he also won it for us. The Civil War almost tore this country apart but thanks to General Grant we’re still united as well as one of the most powerful countries in the world today, what a guy!

Let your little one lead the charge this Halloween and you can follow him as a loyal soldier while he spreads patriotism and trick or treats all around the neighborhood. Grant eventually became the president of the U.S. for his amazing feats of heroism, so we bet that if your kiddo collects enough sweets this year, he would at least be considered for a presidential nomination!

The tunic jacket fastens at the front with the gold-tone buttons. Fasten the faux leather belt with the fastener at the back. The bow tie has an elastic neckband that also fastens with Hook and Loop fastener. Synthetic hair makes up the beard and it is designed with an elastic head-strap to ensure a secure fit. The boot tops are made of faux leather and have elastic underfoot. The included hat is decorated with a gold cord band and a shield decal designed to replicate the American flag.

United We Stand with Candy in Hand

Help your youngster transform into a historical figure this Halloween with our General Ulysses S. Grant Boy's Costume. He may not have to get half of the nation to surrender, but this holiday can sure be quite the battle. After all, everyone is trying to go home with the most treats but with your little one’s keen mind for strategy, we’re sure he’ll come out victorious!