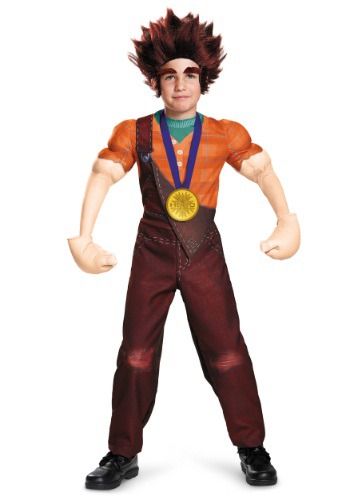 We totally don't blame poor Ralph for losing his temper and wrecking things. That is, after all, what he is programmed to do. We do however feel a little bad about how he's treated by the rest of the Nicelanders in the game. It's not like Ralph asked to be the bad guy or anything! He's just following the rules of the game!... which unfortunately includes smashing things.

Anyone who who takes a little time to get to know Ralph would realize that he's not a bad guy at all (he simply plays one in-game). Ralph is in fact a pretty useful guy. He's super strong with amazing smashing abilities (which totally come in handy when there's a bug virus trying to take over the game). He's also got a sweet personality and is pretty determined, just ask his friend Vanellope Von Schweetz. They created a candy car, made a race track, and saved the arcade... you know. Hero stuff.

So if your kid is ready to be like the friendly, but unlikely hero, Ralph, then they'll need this Deluxe Wreck it Ralph Costume. This 100% polyester jumpsuit looks like Ralph's clothes with attached stuffed muscles and stuffed gloves (smashers need nice big hands!). The outfit even comes with sticker eyebrows, a spiky synthetic wig, and a Hero medal, which is everything your kid needs to be the arcade's most heroic villain. Now, if you'd kindly remind your kid only to smash things when required, our candy cars would be eternally grateful...