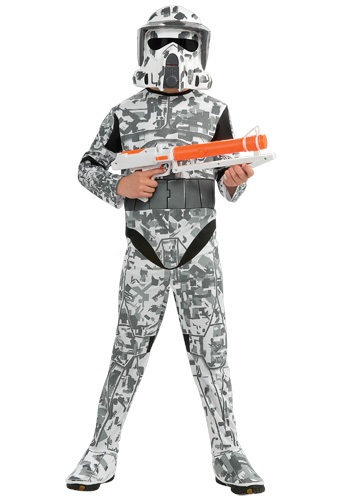 ARF Troopers are to clone soldiers what SEALs are to the Navy. They are some of the best of the best. These soldiers are incredibly skilled but most notably very stealthy. When you are called to carry out recon missions that could mean the difference between winning and losing the war, staying off the radar (literally and figuratively) is a must. Wearing the right colors was also very important to their stealth missions. For instance, ARF Troopers who fought in the desert wore brown and yellow, while the troopers doing recon in jungle areas wore green. For standard missions, they typically wore their blue uniform. When they are on planet, their usual means of transporting themselves is by AT-RTs. Because the nature of their missions is usually gathering intelligence, they are typically the first to sneak into most enemy territories. Since these missions are dangerous, the ARF Troopers are loaded with gear that ranges from incendiary grenades to full-on bazookas. This particular trooper costume is in black in white, which we argue is the best color scheme for these uniforms yet! We are thankful for all of the dangers and risks the ARF Troopers go through to keep our galaxy safe. You will love this Kids Star Wars Clone Wars ARF Trooper Costume if you are also a fan!

ARF Troopers are very rare. Do you think you have what it takes? First and foremost, you need to pick up our officially licensed Kids Star Wars Clone Wars ARF Trooper Costume. This costume comes with a screen-printed jumpsuit, so you'll feel like you came right out of The Force Awakens movie! The attached foam boot tops will help give credulity to the outfit if you happen to misplace your original camouflage footwear. The half-mask stays on your head with an elastic band—a must-have during those incredibly hard-fought battles. Pick up this costume today and get ready for action!