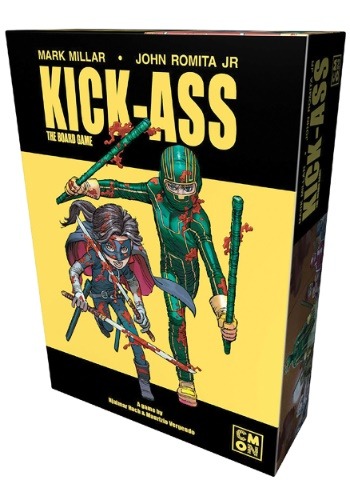 Kick-Ass: The Board Game

Time to Don Your Cape

Anyone who wants to be anyone needs to head to New York City. It's where fame begins and where money can be made. Unfortunately, that brings a lot of nefarious ne'er-do-wells to the city, too. Fortunately, several heroes are always ready to rise up against them. And, why wouldn't they? Just think of all the Social Media traffic that they're going to get for their amazing new costume and kick-ass moves when they bring the hurt to the bank robbers!

That's right. Kick-Ass has been an amazing comic. An awesome movie. And now it is time for the board game!

It is time to take a trip for fun when 1-4 players unite and take on the role of one of seven glorious do-gooders who try to keep New York City safe... or at least become World Famous! In this 60-90 minute, cooperative board and card game, players will have a unique deck of actions based on the character they choose. Over the course of several rounds, the city will fill with minions and events will occur that demand the players' attentions. As a group, decide who will try to tackle which problems. Who will stop the minions at the bank? Who will try to discover where Red Mist is hiding? And who is going to use the Selfie Stick so they can increase their social media presence!? Remember, these heroes aren't bionically empowered aliens. They're regular folks trying to do the right thing, get paid, become famous, and maybe even land a date after they're done! Succeed in bringing the baddies down or watch the city fall apart as City Hall gets invaded in this ever-changing game that features the artwork of the Kick-Ass comic books!

If you love the comic book series, you'll instantly recognize the artwork in this smashing cooperative board game. The only question is if you have what it takes to actually win!