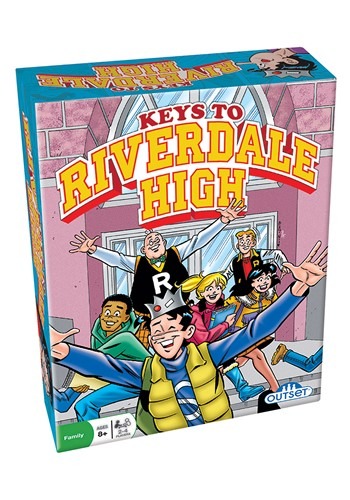 There have sure been a lot of developments in Riverdale ever since it first showed up in comic book form! But the fact that we've learned a ton of new things doesn't mean that there isn't still a lot to find. (Hopefully, the discoveries are more comical than some of the more recent changes, though...) Either way, that principal is still gonna be trouble.

Explore Riverdale High using the very same rules from Keys to the Castle. In this 2-4 player game, you will lay out tiles to create the various halls of the iconic school from Archie Comics. Choose a character icon and one of the rows. Each round, you'll draw a card from the deck and then play your choice of cards on one of the rooms on the grid. Then, if you can, move forward, address any cards on the tile, and see what's on the other side! The first character to the other side of the hall escapes Riverdale for an early break... but don't get caught or you'll face detention with Mr. Weatherbee.

If you're between comics or episodes of the epic Riverdale saga, you can still fit in plenty of fun with this 10-20 minute game. Enjoy the artwork and quirky game design as you play Keys to Riverdale High with your best Jughead buds.