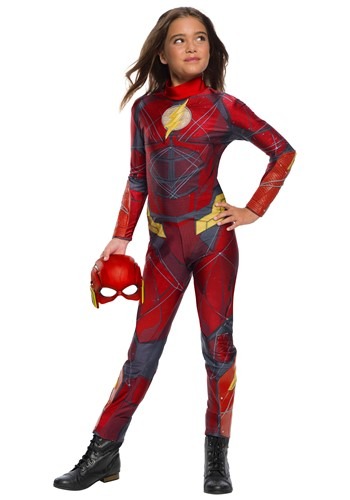 New Flash on the Block

The Flash isn't just a single person. In the history of the comics, many different characters have held the title! First, Jay Garrick mastered using the Speed Force to protect Keystone City. Later, the mantle passed to Barry Allen, the most famous Speedster of them all! Of course, Wally West (known as Kid Flash for some time) became the next apprentice to toe the line. Anyone with the guts to harness the Speed Force could be the next hero in line for the job. In fact, if your girl is trying to get into the superhero game, then she may just be able to take on the role of The Flash!

To start her career as the fastest girl on the planet, she's going to need a superhero outfit! This Justice League Flash Costume for girls is the perfect look for that role!

Based on DC's Justice League movie, this Flash costume comes with everything your child needs to look like a hero! The costume starts with a simple jumpsuit that's made out of a spandex blend material It has a zipper in the back for fitting, so it's easy for your child to suit up! The jumpsuit has printed details, including armor details and faux rivets. It also has a vinyl lightning bolt symbol on the chest, along with matching vinyl shin guards. The mask is made out of molded plastic and fits with an elastic band around the forehead. It all combines for a look that's ready for any young intrepid hero-in-training!

If your child is ready to maser the Speed Force, then she's going to need a costume to get her started! This outfit has everything your child needs to take on the title of The Flash!